While the moniker “America’s Techiest Lawyer” may conjure an entity with a quad-core heart, onboard latte maker and a predilection to show up for court in holographic form, it turns out law’s real-life silicon wonders are a bit tamer than that.

But not by much.

During the past few weeks, the ABA Journal has been on cybersafari for the dukes and duchesses of the digital realm. And while we have no trophy lashed to the hood of our Jeep yet, we do have a much better idea of who we’re looking for—thanks to some expert hunting tips from gifted guides who, on another day, would be considered fair game 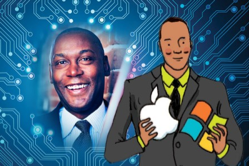 Interviews with some well-known names in technology-enhanced law practice led us to a list—a sort of trait-based picture—of what would make an attorney one of the techiest lawyers (Photo Gallery) around.

Next time you find yourself with silicon stardust on your sleeve and you spin around to grab a look at law’s next big thing, chances are you’ll find your wunderkind possesses all, or at least most, of certain telltale markings.

While America’s techiest are polite enough not to froth at the mouth, they’re nevertheless afflicted with an insatiable technolust. Like kids scrambling to the jingle of the ice cream truck, they just can’t help themselves. Some might even call them rabid.

With every wave of new technology, they’ve seen their lives get better and their ability to engage with clients become quantum-enhanced, and they simply can’t wait to see how the next promising tool can be artfully mastered to bring about an even better world. “I often feel that I’m working and moving at twice the speed of those around me,” says Barron K. Henley, a Columbus, Ohio, managing partner at Affinity Consulting Group. “It’s simultaneously gratifying and maddening. My children have called me ‘Mr. Computer-Head’ since they were old enough to talk—and they’re all teenagers now. I probably need a support group and medication.

Nominated by Laura Carpenter: “When I decided to launch my own Internet-based legal research/regulatory intelligence company, I hired Garland—he provided exceptional advice on how to set up the business and what to look for in regard to technology…Read the full quote Listen to the Interview with Garland Brown and ABA Journal